Alternately “How to Be Polite when Using a Trashcan”

I am not writing this because I think I am any better than anyone else in terms of Trashcan etiquette. I violate the below guidelines as often as anyone. They are simply my thoughts on what a Trashcan etiquette should be. This etiquette applies to the users of any sort of communal trashcan with no regulated emptying schedule.

Leave the Trash Can in the state that you wish you had found it. Do not inconvenience the person who will have to throw away trash next.

Empty the trashcan when it is full.

You have made the trashcan Full and should empty it when the addition of your trash makes it difficult to reasonably expect the next person to be able to place their trash easily in the trashcan.

No one should approach the trashcan full.

The nature of the trashcan matters.

Don’t try to ‘get back’ at someone who did not empty the trashcan by not doing it yourself.

Position your trash so that it is easy for the next person to insert trash. 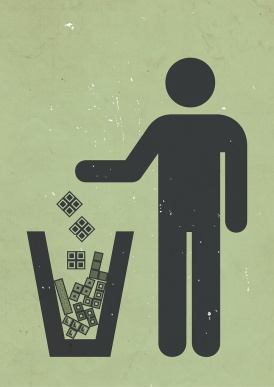 Performing a balancing act with trash is NOT polite. If the next person accidentally knocks your trash out of the trashcan because it was precariously perched, they will have to pick up your gross trash, and will not be happy.

If you have several items that could be stacked together in a way that saves space, do so. For example you can stacking several used cups, or stuff some other trash inside those cups to save space. Saving space in the trashcan makes it so that the trashcan does not need to be emptied as often, which is good for everyone involved.

Do not put your trash at weird angles, or just stack it on top if doing so obstructs other trash. For example, putting something large and flat on top of the trashcan makes it more difficult for the next person to put their trash in. However, turning the large flat object on its side, and stuffing it down lengthwise will allow for other people to more easily put their trash in.

This one may seem odd but it is easy and important. A dirty trashcan will smell and look gross. There are many things one can do to keep the trashcan and the surrounding area clean.

Put a new bag in the trashcan after you have emptied it.

A person approaching a trashcan with no bag will be almost as vexed and one approaching a full trashcan. As the person emptying the trash, it is your responsibility to remember to put a new bag in.

And now you know some tips on how to use a trashcan politely. Please use them. And the world can be a cleaner, tidier place.