Slime Rancher is a game where you play as Beatrix, a rancher out on the Far Far Range out in space somewhere. You explore a world filled with creatures called Slimes which create valuable Plorts that you can harvest and sell for money. Explore the world to find rarer more valuable, and more dangerous slimes, expand your ranch, and unlock new abilities and equipment.

First off, let me just say that I love Slime Rancher. From the moment I saw it, I was intrigued, but I didn’t have very high expectations. I bought it thinking it would be fun for a little while. Little did I know it would become one of my new favorite games. If you enjoy farming games, games like Stardew Valley, or Harvest Moon, or base building games like Minecraft or Don’t Starve, I highly recommend Slime Rancher.

I highly recommend this game. You will not regret buying it, you certainly get your money’s worth. I bought this game thinking all there was to do was explore the world, find some slimes, and bring them to my ranch. But there was so much more! Upgrades, expansions, lab construction, the 7Zee Club, not to mention Ogden’s Retreat and Mochi’s Manor. There is a lot of game to be had here, and it is so much fun. Just the gun that you use to suck up and shoot out slimes is ridiculously satisfying.

Let me preface this by saying that I am at the end game of Slime Rancher. I have almost bought and unlocked and found everything (that I know of) that the game has to offer.  My ranch has changed quite a bit throughout the game. I did at least three major overhauls of plot arrangement as I learned about the game, and as my priorities changed. What I have now is the result of a lot of trial and error, but I am very proud. 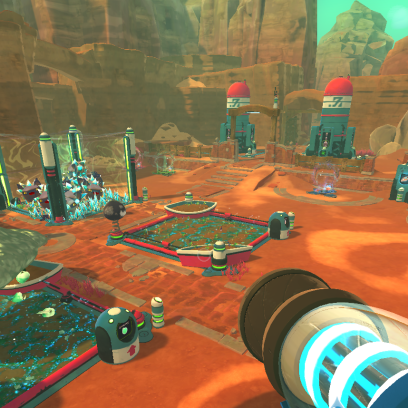 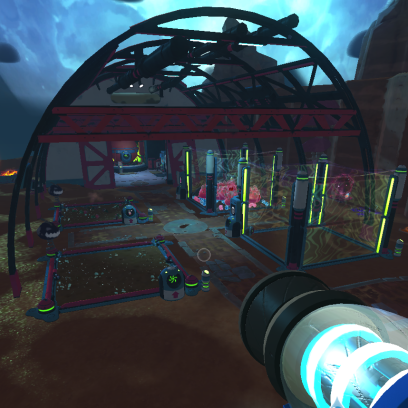 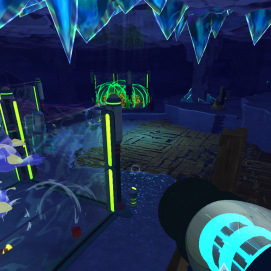 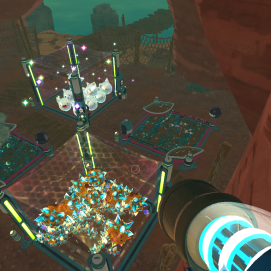 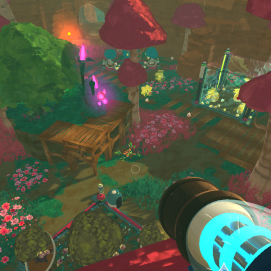 My first farm layout had about 1 crop for every 2 corrals. After I was making enough money for automatic feeders to be pretty standard fare though, I realized that for maximum efficiency in producing plorts each corral needed its own food source. Because slimes produce twice as many plorts when fed their favorite food, I made the crops associated with each corral a favorite food of the slimes in the corral.

I always had chickens on my farm because I liked them, but I never really used them to great effect until I got access to the Warp Depots. Now, I have 4 Warp Depots set up around 2 chicken coops in my main area. The Warp Depots are set up next to the corral of each slime that has a a type of chicken as a favorite food. I periodically cull the chickens and put them in the appropriate Warp Depots, so that I can easily periodically give my slimes a tasty chicken snack, and I don’t have to remember which type of slime likes which type of chicken, because I just take the ones out of the depot nearest their pens. 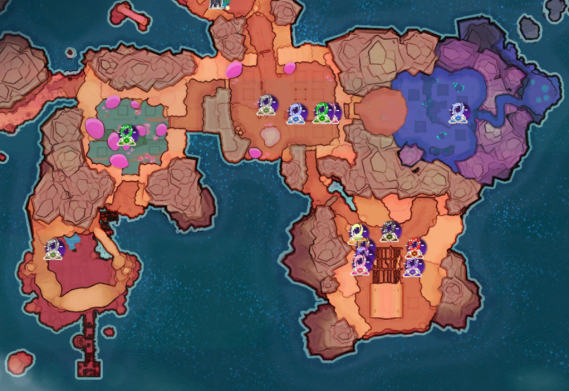 Overall, I have 2 corrals per area, and 2 crops. I have a warp from each extension to the main area. I then have several warps in the lab area leading out into the world where my various extractors are. I have a Refinery Link and Market Link in every area.

My Main Ranch area has gone through the most changes throughout time as my needs changed and more space became available. As of now, I have 2 silos up on the hill leading to the Lab. One is for food, the other for plorts and other misc. I have 2 chicken coops leading to the Overgrowth.

Currently, I keep my ‘money makers’, Honey  Mosaic and Crystal Hunter slimes in my main ranch area. These are new, and I have yet to ‘vet’ them for ease of ranching.

I keep my pink rock slimes in the lab area. The other corral I was using as storage for ‘non-largo’ slimes so that I would have easy access to them should I need them. However I felt too bad that I was not feeding them, and they looked so sad looking forlornly at the food left over from the pink rock slimes next to them. So I decide to free them, and now need to decide what to put here instead. Most likely tabby phosphors for easy plort production.

I went with largos as opposed to normal ‘purist’ slimes for a couple reasons. First, they are much more efficient and profitable. For one piece of a favorite food, a largo will produce 4 plorts. Secondly, I just like the combinations. They are fun. I chose my largo combinations carefully based on a couple factors. First of all, I wanted to have as few repeats as possible. This meant with 14 types of slimes, I would have 7 largos.

After that, the most important consideration was diet. I found raising chickens as food was much slower than cultivating crops, so I made sure not to combine any of the meat eating slimes together. I also made sure that the Saber and Pink slimes, which have no favorite food, were not combined with a meat eating slime. Also, since odd onions have much lower yields than other crops, I made sure not to combine Crystal slimes with the meat eating, or Saber and Pink slimes.

After diet, I took into consideration the dangers of each type of slime, and had many trial and error combinations. And, finally, of course aesthetic.

My first ever largo, and a tried and true classic. The Pink Rock largo fell out of style in my Ranch for much of the mid game as the plorts did not sell as well as any of the other slimes I had access to. Once I unlocked the Lab, and realized that the ‘cheap’ plorts were the most needed for fabrication, I went back to the tried and true pink and blue. Originally housed in the main part of my ranch, I moved them to the Lab area after I unlocked it for easy access to the refinery.

Probably my favorite largo currently on my farm.

The tangle slime is my favorite of all the slime. I loved the quantum slimes as well, until I had several bad trials with them. I tried combining them with several other slimes including Pink, and Tabby. But for some reason they just would not stay in their corral. I grew to despise the quantum slimes for their escape artistry, and had a long stint on my farm where there was not a quantum slime to be found.

Then one day, my Tangle Tabby slimes all tared because my boom rad slimes had thrown one of their plorts within grabbing distance. I was very sad. But it gave me the opportunity and inspiration to try Tangle Quantum largos. I put them in the Overgrowth so rather than escaping, they would have chickens to reach for if they got hungry, (and would be relatively secluded from other slimes so they do not accidentally reach for plorts). Just in case though, they have a Hydro Turret next to their corral.

So far, this combination has worked out fantastically. I have only 6, to ensure that they never want for food, but they often have uneaten food rotting in their pen, so I may add another.

The dervish slime is another that had many failed combinations. I initially planned to combine the dervish with something more volatile, since it is relatively safe to be around. However the chaos it causes when hungry was way more damaging than I expected. I did not want to have to deal with it exploding on top of all that.

My normal slime count per pen is 10. However, I found it impossible to keep 10 dervish slimes fed. For a long time, I did not receive a single plort from my dervish largos because they sent them flying into the air before the plort collector could suck them up. So I have only 6 of them, and they are overall much happier. Even so, I have them in the most secluded part of the Overgrowth in case someone throws a tantrum.

This was another combo I had from early game that lasted to the late game, the boom rad is another of my favorites. My reasoning for keeping this largo combination was mainly personal preference. I originally had boom rocks, and I hated them with a passion. While radiation is annoying, it was not nearly as annoying as contact damage. So once I got boom rads, they felt infinitely easier to deal with.

After this, I started getting the more difficult to deal with slimes like hunter, crystal, and quantum. While other stuff was going wrong everywhere else on my ranch, my boom rads just sat in a corner (I originally had them in the overgrowth before I needed that space for the dervishes) and minded their own business through all of the mid game. I grew attached to the boom rads mostly because they lasted and never caused trouble. So even in late game, I have kept them. I have 10, and they are now in the cave so I can see them in all their glowy glory, and they never cause a ruckus.

The phosphors are probably my most well tested slime. I really like way the phosphors look, and every opportunity I had to try them with something I did. I eventually settled on phosphor hunters because they look so dang cute, and they are one of the few combinations that don’t seem to make hunter more dangerous. I had 10, but recently noticed that they have been disappearing and I am now down to 5. Not sure how this is happening, but I assume that they are escaping somehow.

I had a few different combinations with crystal and honey before I settled on honey crystal. Honey was easy enough to deal with that I could try it with pretty much anything. Crystal was the opposite. Everything I tried it with, I hated for reasons of difficulty to deal with its attitude. Still not one of my favorites, but very profitable. I originally had them in the caves, but found them obnoxious, especially with the hunters in the other corner also exploding all over the place, so now I keep them in the Docks so that they are far away from anything else I need to do.

I really enjoy the Mosaic Tabby. Overall it is a very easy largo to deal with, and it looks very cute and pretty. This was the first combination I tried with the mosaic slimes, and it stuck. I have since tried a few other mosaic largos, but none is as cuddly and likable and safe as the mosaic tabby.

And that is my ranch! As you can see, I love playing this game, and I have put a lot of thought into playing it. I am now at the end game and starting to get a little disenchanted, since now I have explored the world and reaped all the rewards there are to find. Now, I am just farming plorts for money for the 7Zee Rewards Club, and doing the Nimble Valley and The Wilds quests. I expect I still have many hours left in this game, but I can see the end of the journey drawing near. I will look back on these days with fondness, and be proud of what I have accomplished here in this virtual realm of the Far Far Range.

1 thought on “My Slime Rancher Ranch”