I am not the most avid runner. I mostly do it because as a person who works on a computer all day, I need some sort of routine exercise in my life. And running is an exercise with an easy barrier of entry. Also my boyfriend likes running.

The Bolder Boulder is an annual 10k Race (about 6 miles) held on Memorial Day in Boulder, CO. This year, my boyfriend asked me if I would run it with him, so I decided to give it a go. This is my experience of the BB, which hopefully will give some of you an idea for a fun annual activity to give a try someday. Even if you don’t live in the Colorado area, there are probably other similar running events you can participate in.

The most I had run in one go before the Bolder Boulder was max maybe 4 miles (probably more like 3, I’m just being optimistic). And my ‘minutes per mile’ average is sits above 10 minutes. I also tend to get stitches regularly on my 1-2 mile runs. And don’t get me started on runner’s trots. So, all in all getting into the BB was a bit daunting for me.

I am here to tell you its not as hard as it looks. Despite my misgivings and my running history, I still had a lot of fun. I would recommend this experience to anyone who just likes going out and having a good time.

Images Courtesy the BB Gallery. Except for the featured image. That’s mine.

Its Only as Hard as you Make It

First off, the BB is only as hard as you make it. There are something like 100+ ‘waves’ of people divided relatively into their ‘running prowess’. While there were a lot of people who ran, there were even more people who just walked the entire 6 miles.

My boyfriend was in the BA wave, one of the first to start, because he runs regularly. His goal was to run his hardest and find out what his time would be. I was in the NE wave, which started 2 hours after his, which consisted of people who planned to jog mostly, but walk sometimes. My goal was just to jog as much of the 6 miles as I could before I was bored of being sweaty, achy, and tired.

My boyfriend’s mom was also in the BB in one of the walking waves. She was just hanging out with one of her friends, using the BB as a fun activity during which to chat and catch up.

All in all, you don’t have to be a runner to enjoy the BB. If you are simply able to walk 6 miles, (or even just walk for 2.5 hours), you can still have fun participating in the BB.

The Atmosphere is Really Fun

There were a lot of things that made the BB fun despite (or ‘in addition to’ if you are crazy) all the running. 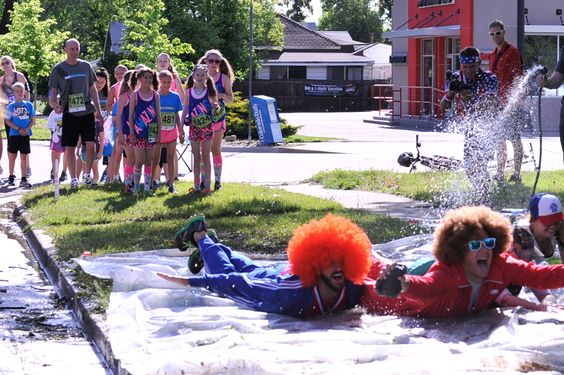 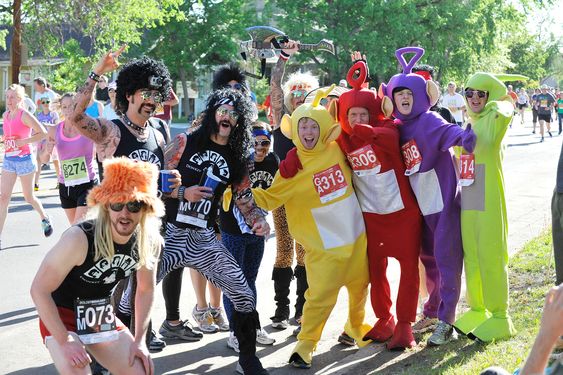 There were also tons of handouts as you ran by. There was of course water being offered every mile. Grab a cup and drink it then just toss it on the ground. But there were also tons of other stuff from sponsors and sideliners. There were freezer pops (I saw the wrappers on the ground everywhere but never found where they were distributed), there were Doritos, there was fresh bacon, cupcakes, there were even some people giving out Mimosas. And beer. So much beer.

Surprisingly, all this really helps you run. The atmosphere is very encouraging. I was able to run pretty much all 10k of the BB (except for maybe 1/4 mile when I needed to find a restroom). I was admittedly in great form, but I cannot deny being urged on by the whole atmosphere and spirit of the event. Running with so many people is in and of itself encouraging. Seeing so many average people like me struggling just as hard really made me feel not as lame as I do when I run by myself. Also, there are a lot of people on the sidelines who cheer you on. The BB ends in a stadium filled with all the people who came before you, cheering you on to the finish line around the stadium’s track. Its pretty darn special. I was so tired by the time I got there, the wave of emotion that hit me as I entered the stadium almost made me cry. This might have also been in part due to the fact that I saw my boyfriend on the sidelines in front of the stadium cheering me, and all my fellow runners on. ❤

The Price Tag is Worth It

Definitely not something I would have thought I would say. The cost of entry to the BB was a minimum $70, which seemed super steep to me when I registered. Why pay that much money to run when I do that regularly from home for free? But my boyfriend wanted me to go, so I bit the bullet. It wasn’t until I actually participated in the BB that I realized why the price was worth it.

The BB is not just a run, its an event. Especially if you can go with your friends or family, you are going to have a great time. Its a wonderful memory, a great outing, a fun experience. When people say that you should spend your money on experiences, not things, this is what they are talking about.

Not only is it a cool event, at the end of it all if you stay in the stadium you get to watch the professional runners compete. Its like getting to see a mini Olympics, or going to a sports game. Those people are fucking athletes, and getting to see them run and cheer them on is a treat in and of itself. Also, after the Memorial service, there is a person who fricken para-glides into the stadium. We had left by then, but we could see him from outside the stadium as he came in, and it was pretty rad. 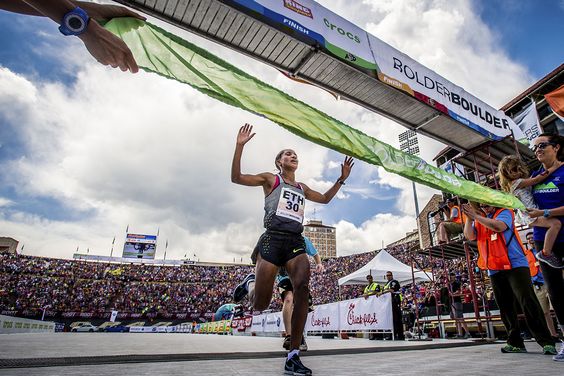 As if that wasn’t enough, there is also tons of swag. With sign-up to the BB, you get a pretty high quality T-Shirt (you can get even higher quality or more than one shirt if you pay more than $70). You also get a goody bag that includes some exclusive coupons and a calendar. At the end of the BB, we got to pick up a free lunch box filled with delicious snacks, more coupons, and of course, beer. Nearby the stadium, there were also a bunch of vendors, and a stand giving free massages to BB participants.

Tips for Running in the Bolder Boulder

Get there early. Parking was fine for my boyfriend whose wave started at 7am. But by the time I got there, around 8am, for my wave starting at 9am, there was not a parking spot to be found. I had to park 2 miles away, and walk those 2 miles before the 6 mile run. It took me 40 minutes and I barely got there in time for my wave.

Read the rules and bring as little as possible. The BB doesn’t allow people to bring non-transparent bags or bottles with them as they run. They also ban selfie sticks. In general, make sure you know what is allowed. But in general, I suggest just bringing as little as possible. There are ‘mobile lockers’ you can store your stuff in that will be transported to the finish line for you to pick up at the end. If you are worried about water and snacks, trust in the course, it will provide.

Try your hardest, and be happy no matter the result. You are awesome for just being in the BB in the first place. Just by being up and out and on the course, you are already being more active and fit than everyone who decided to stay home and sit on the couch. So don’t worry about your time or how you did, that is not the point of the BB. The point, is to spend a morning doing something fun and memorable.

Start slow, and get faster as you go. For the people trying to run for speed, my boyfriend strongly suggests starting off at a relatively easy pace, and trying to get slightly faster with every mile. Rather than sprinting the beginning and tiring yourself out, and getting slower every mile. Its good for the spirit, but also helps you pace yourself, and get the most out of yourself.

In case it isn’t obvious already I had a really great time. Yes, I was tired as balls afterwards. I had to take a short lie-down in the stadium after I had finished because I literally felt like I would be sick if I sat upright. We also took a short nap when we got home to recover from the ordeal. But all in all, it was a great time. I’m looking forward to doing it again next year.